The Story of Skypath 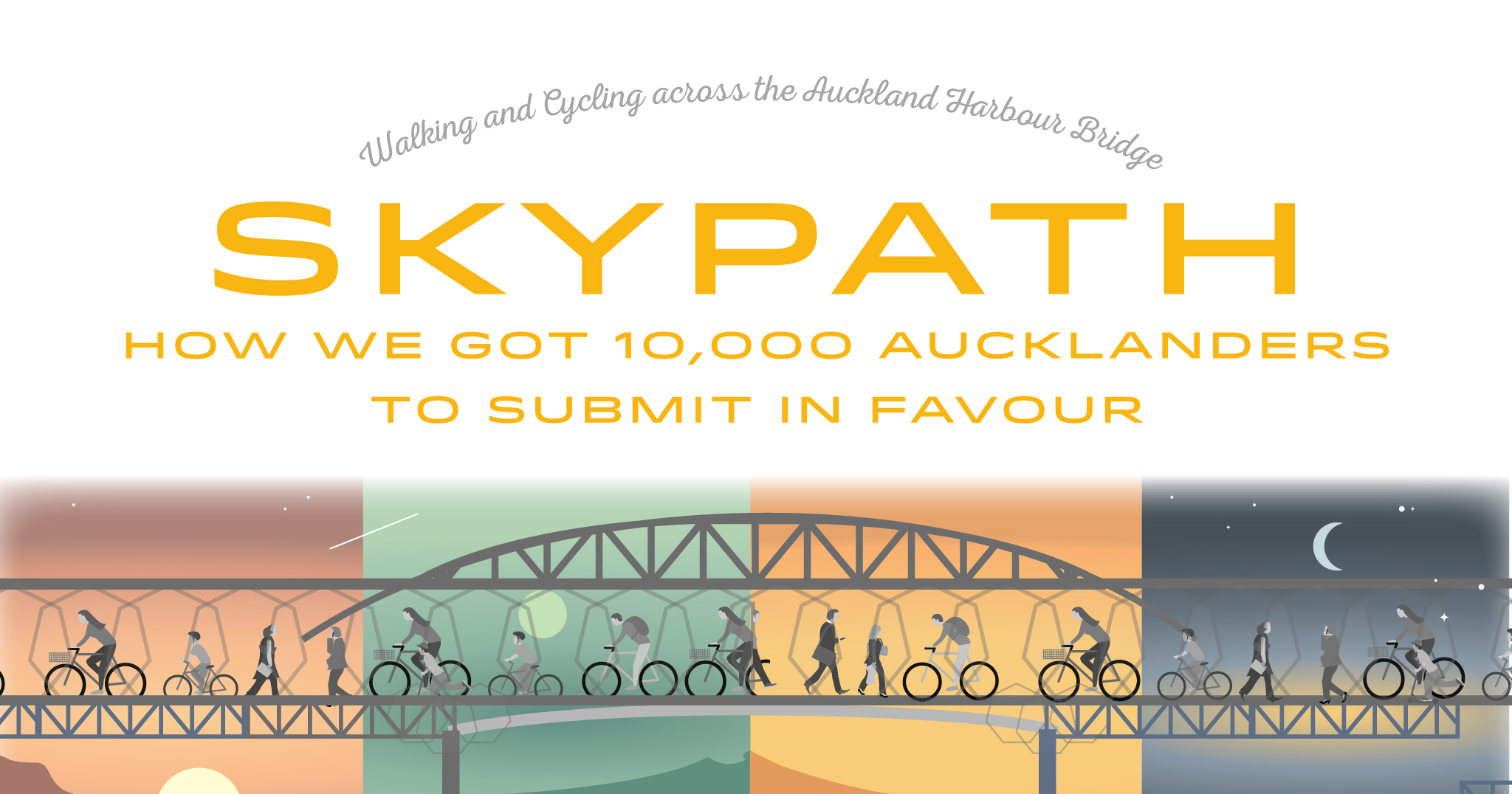 For Generation Zero Auckland, Skypath's vision of walking and cycling over the harbour bridge is one of the most exciting parts of a liveable-low carbon city that almost all Aucklanders are passionate about.  That's why when we heard that there was a high risk that the project might be blocked because of a small vocal minority we decided that something had to be done to make sure the enthusiasm and aspiration of all Aucklanders was fairly reflected to the decision makers. 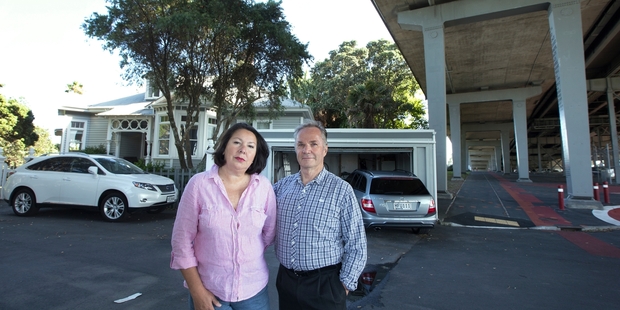 The problem was however, that Skypath, like any other development had to go through the most tedious and offputting of democratic processes in NZ - resource consent. This meant that although most Aucklanders were highly in support of the idea, the reality was a well funded group of local residents worried about people cycling past their houses, would be able to hire lawyers and flood the submissions with arguments against. For the rest of us the only way to usually submit is to burrow deep into the council website to find the right form and then feel confident enough to wade through the technical questions to articulate a more supportive perspective.

For us the challenge was clear - Show the resource consent Comissioners that the local NIMBYs (NotInMyBackYard types) were not representative of those people affected by the decision and that instead an overwhelming number of Aucklanders wanted the Skypath built.

We at Generation Zero Auckland however felt that it shouldn't be that hard.

So with almost no budget and no legal team to speak of we set about on a campaign to get as many supportive submissions as possible. Our campaign had 3 parts.

1. Make it really quick and easy to make a submission.

Possibly the most important part of our campaign was that we understood that in the information age getting 1000s of people to voluntarily make an otherwise long and tedious submission had to be simple, quick and easy to lower that barriers for people.

The best way for us to do that was by creating a much simpler form, that focussed on what you needed to know and not what you didn't. It simply asked why you supported skypath and then your contact details. All the official resource consent numbers and boring council stuff was done automatically for you behind the scenes. Rather then the council website we realised it was much more important to host it on our website to show that other ordinary Aucklanders were getting behind it too. 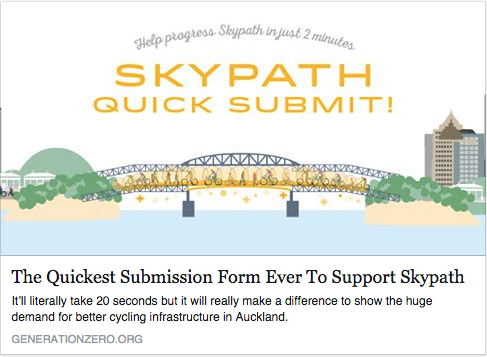 At the heart of our campaign was an understanding that we knew access to the form had to have a clear virility. Across a number of social platforms including Facebook, Twitter, Instagram, LinkedIn and Buzzfeed we fed out a variety of posts that continuously pointed to the same link and the same hashtag #Skypath.

Upon completing the form we also pre-populated Tweets and Facebook posts for users to make a single click to further feed shares.

3. Clearly and simply explain the issue.

Resource consents sound scary and complicated. We wanted to make sure understanding and supporting Skypath wasn't. 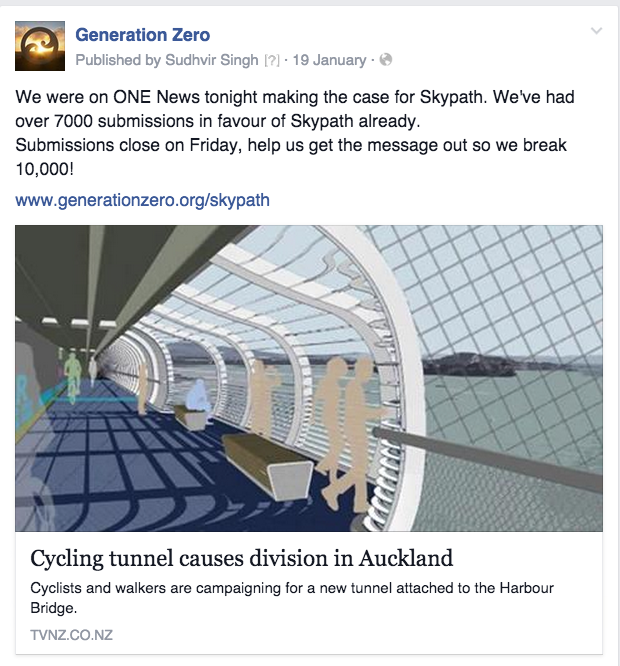 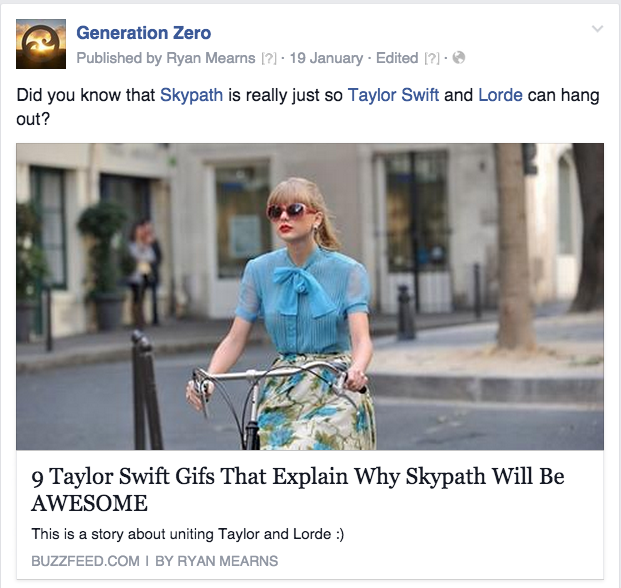 How we did it

This meant that it broke the record for the highest number of submissions for a resource consent process ever in New Zealand.

The enthusiasm for the project and rapid growth in submission through the the easy process prompts some important questions; why did it get so big, is it possible replicate and how should Council change what it does to engage this number of people on a more regular basis in complex planning decisions. 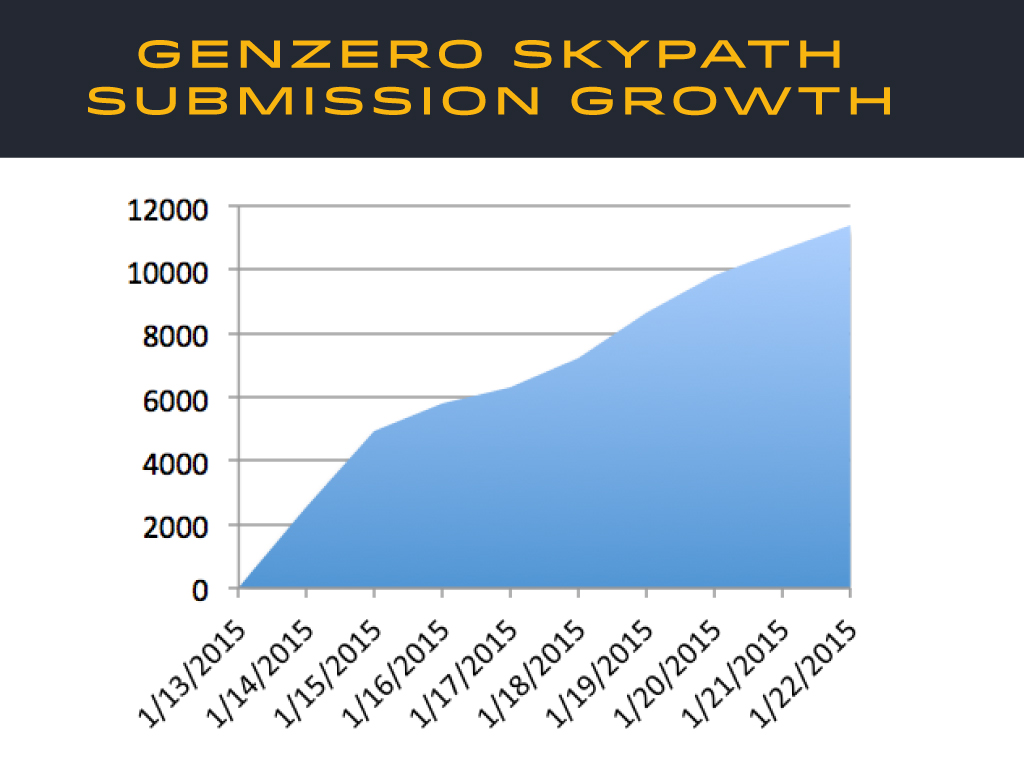 The overwhelming feedback was that Council’s form for submitting required such a high level of engagement in the project it turned many people off. It required finding application numbers and submission details which meant plunging deep into the supporting documentation of the project. This meant Council had already turned away 90% of people that would submit on the project by making it to difficult to find the supporting information. In the past this complexity has also meant submissions have been discounted for other resource consents, like with the high profile case of the pohutukawa trees on Great North Road.

Simplifying the process with a quick submission form elicited a much larger response from the public just because the process wasn't so cumbersome.

One important lesson from the campaign is the way we framed the consent process. A simple consent process was turned into “the last hurdle before construction” and had five simple reasons why people should submit on the project. A clear explanation of the project built a story of the project that people could relate too and added a sense of urgency. A clear question of “why do you support it” and “how does it expand your transport choices” gave people a way to make the project personal to them, allowing people to express their own personal desires for Auckland.

The other aspect that allowed more than 11,000 people to submit on the project was the network of people telling their friends. On Facebook alone the page received over 11,000 likes, comments and shares. It shows how connected Aucklanders are, and with about 400 submissions coming from expats in 42 countries around the world, the project has global appeal.

So what can it teach us? It shows that if you simplify the process and give people a compelling reason to submit on a project that may directly affect them, people get pretty passionate and want to share it with their friends. Luckily, Council was very flexible with the Skypath quick submission form, which made it easy, as it took down their server at one point with the amount of emails coming in.

The whole campaign had a number of lessons for community groups across Auckland. It show that Council is worth engaging in if you have the right tools and frame your communication around a compelling story with a clear and simple ask.

Not only was our #Skypath campaign a success in terms of the number of people it reached but the overwhelming response also delivered the result we were looking for. 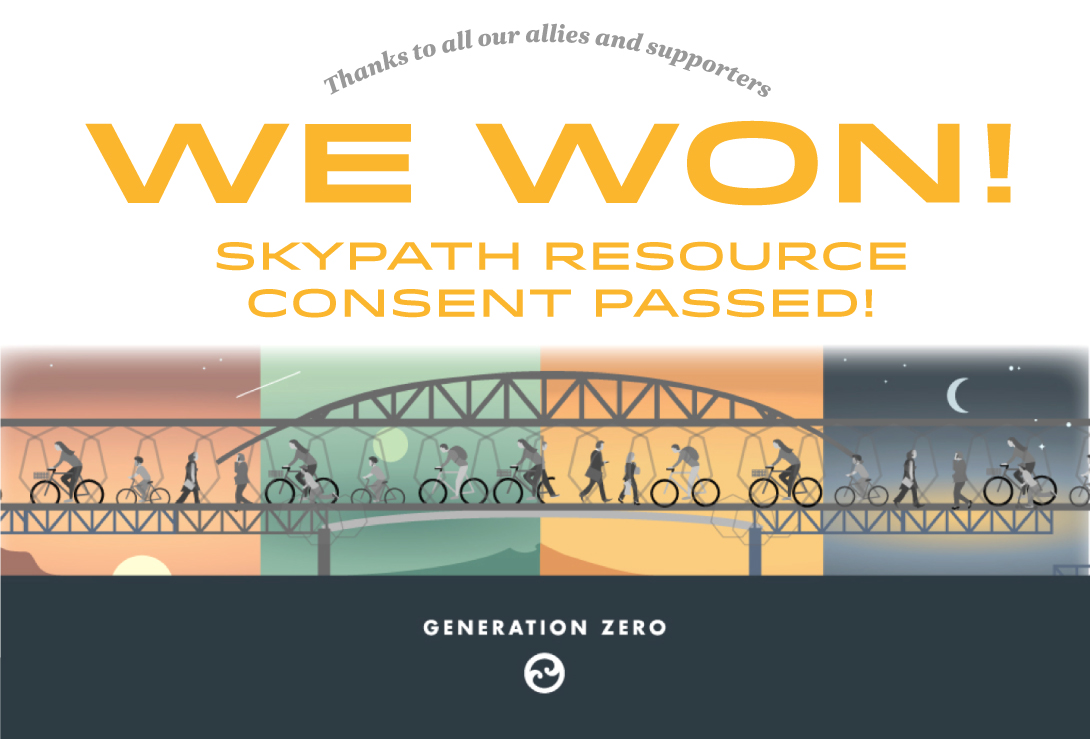 The buzz around our campaign continued with excitement of the win spilling over from Social Media and into traditional media.

With an article in the NZ Herald

A Story on 3News 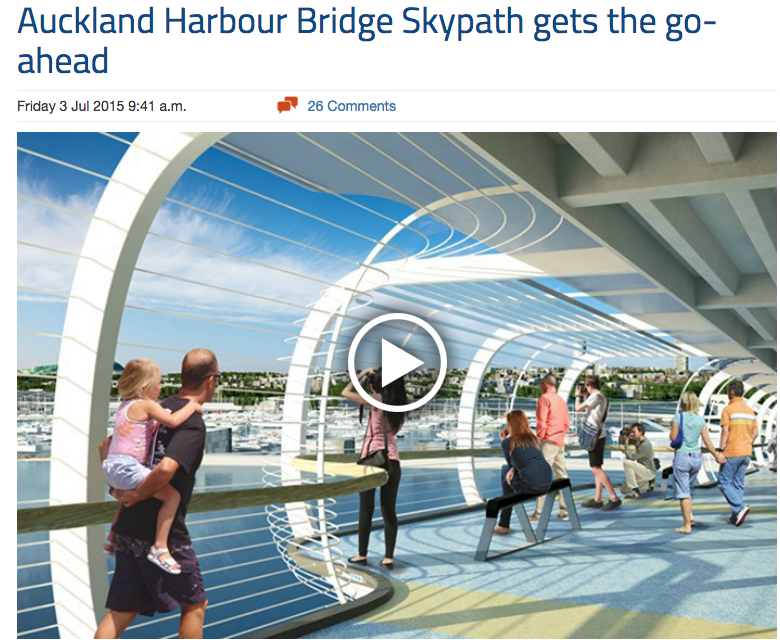 And a special segment on Newsworthy with Generation Zero's Sudhvir Singh 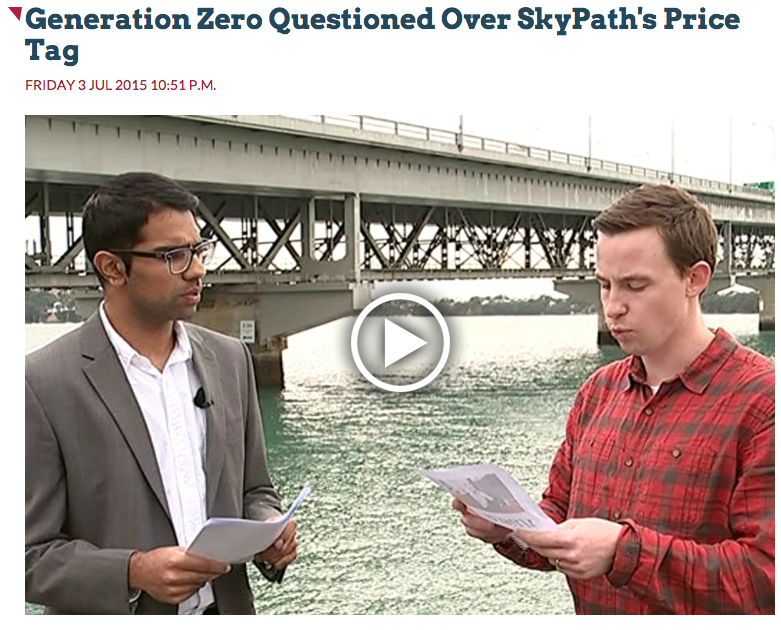 Skypath has proved extremely popular, showing that a liveable-low carbon city is something that almost all Aucklanders are passionate about, giving us reason to be optimistic about the future of Auckland. It also shows that online conversations and social media campaigns can impact change beyond the bubble of social media, empowering people in the real world and building a future that our next generation wants to see.