This is the first in a series of blogs about New Zealand’s post-2020 climate change commitments. Use our quick submission tool to send a submission to the Government by June 3rd at fixourfuture.nz

The climate change debate is littered with numbers, but there’s one that’s probably most important of all: zero.

When we formed Generation Zero four years ago, the name came from a fairly simple realisation: to stop climate change at a level we and our kids can deal with, we need to succeed in creating a zero carbon world within our lifetimes. Carbon dioxide emissions need to fall to zero.

At the time, that felt like a pretty out there thing to be saying, even though it was absolutely clear from the science. Since then, the idea has become - well, not exactly mainstream - but accepted and promoted by some of the world’s most influential institutions. Now, you’ll hear the OECD saying it, you’ll hear the World Bank saying it, you’ll hear business leaders saying it, and it will hopefully be included in the text of the next global climate agreement. That’s some progress.

The ‘four pillars of decarbonisation’, according to the World Bank.


Before I carry on, let me quickly address one sacred cow (literally). Methane emissions from agriculture do not need to fall to zero to stabilise the climate. Carbon dioxide emissions do.

The issue is that by digging up and burning fossil fuels, we are unleashing ancient carbon back into the active carbon cycle, where it will stay for a very long time. Methane from a cow burp has a much shorter lifetime (about 10 years on average) before it breaks down. It has a very damaging effect while it’s in the atmosphere, but it’s not there long, so emissions don’t keep on building up like they do with CO2.

Nitrous oxide, another agricultural greenhouse gas, is also long-lived and its emissions are more important from a long-term perspective than methane.

I might return to this in another blog post, but for now I just want to leave it at this: regardless of what we do about emissions from agriculture, the world still needs to reduce CO2 emissions to zero to stop climate change. Here in New Zealand, we’ve got to stop letting the debate about agriculture distract us from acting urgently on CO2.

We’ve got a finite carbon budget, and it’s running out fast.


The long-lived nature of CO2 emissions means that it’s the cumulative total we release that counts. For a probability of keeping global warming under a certain temperature, there is a total ‘carbon budget’ that we have to stick to.

Generation Zero looked at the latest science on this in our Challenge to Our Leaders report last year, and boiled it down into this graphic: 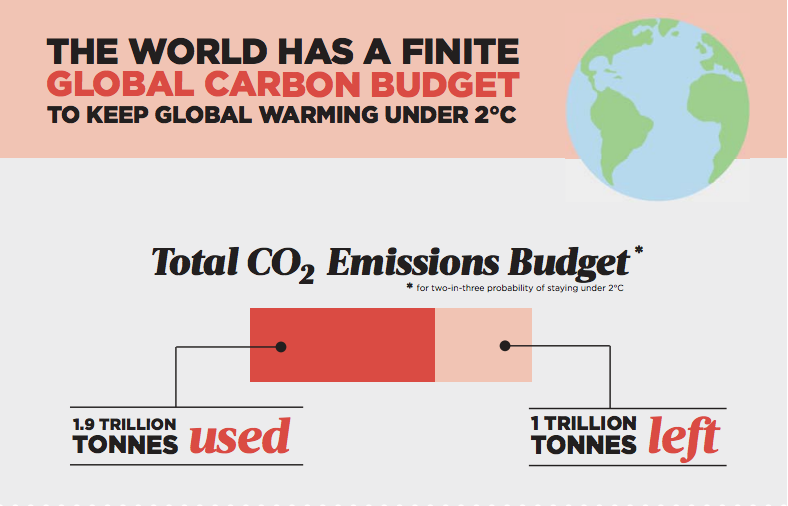 It’s great to see this point acknowledged in the Government’s ‘Climate Contribution’ discussion document with this nice figure: 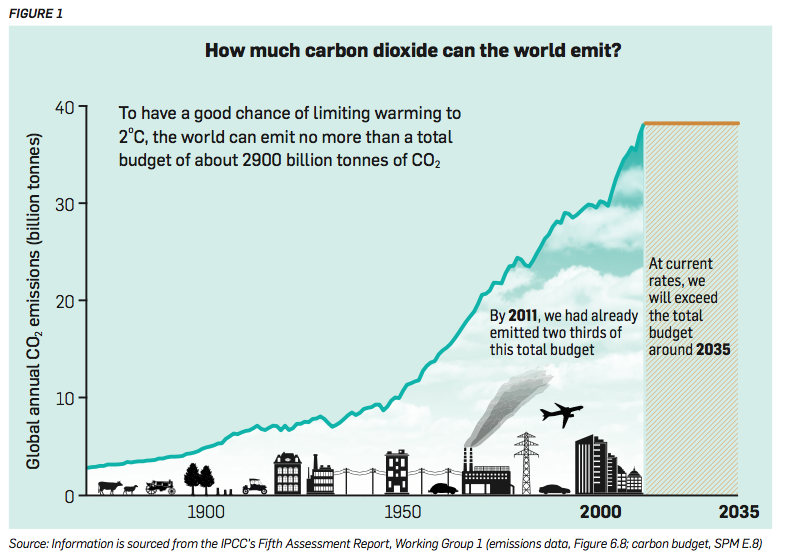 The discussion document stops short of acknowledging the obvious conclusion though: if there’s a cap on how much CO2 we can emit, we have to get to zero. Instead it opts for just “global emissions will need to substantially reduce”.

So at current rates of emissions, our carbon budget is to be used up in 20 years? Yikes.

How soon does the world need to get to zero?


First, you've gotta ask yourself one question: "Do I feel lucky?"

Science always deals in uncertainties, and climate science is no exception. We don’t know exactly what temperature rise will result from a certain amount of emissions, but we can determine a range.

World leaders have agreed to act to limit warming to less than 2°C to avoid catastrophic impacts, but many countries (including our Pacific neighbours) want an even tighter target of 1.5°C for safety.

The IPCC says the carbon budget used in the figures above has a 66% probability of keeping warming under 2°C. (The Government’s discussion document calls this a ‘good’ chance.) Put another way, there is a 1-in-3 chance that the planet would still warm by more than 2°C if we released that much carbon.

If we do accept those not-so-great odds, peaking global emissions now and reducing them in a straight line to zero before 2070 would keep within the budget, just.

But the longer we delay getting started, the steeper the emissions cuts would need to be, and the earlier we’d need to hit zero. As this graph shows, it gets really tough (slash impossible) really fast: 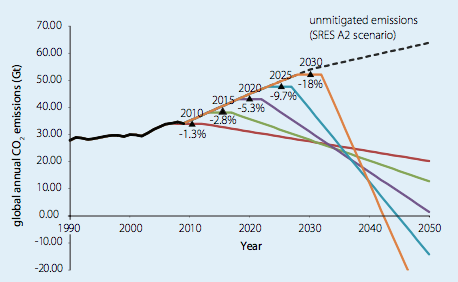 The basic message to take away is this: the world needs to get to zero CO2 emissions by 2070 or earlier. The faster we do it, the better our chances of staying under 2°C. Delaying will only make that harder, more costly, and - eventually - unachievable (without crashing the global economy).

What does this mean for individual countries?


Divvying up the remaining global carbon budget is the crux of the international climate negotiations (well one of the cruxes anyway). But there’s a basic understanding that wealthier, developed countries have the ability and obligation to cut emissions faster and hit zero sooner.

The World Bank, the OECD and many others are calling on all governments to set a timeline, develop a plan, and take action for a zero carbon future. Any that don’t are effectively taking a bet that the world won’t collectively act to keep warming under 2°C.

“If we are to succeed, every country should be able to explain how its policies will get it onto a trajectory that leads in the second half of this century to the elimination of fossil fuel emissions. Governments need to be held accountable.”
Angel Gurría, OECD Secretary-General (2013)

The Trillion Tonne Communiqué is a declaration signed by 159 global businesses - including Shell (!) - calling on national governments to do the following: 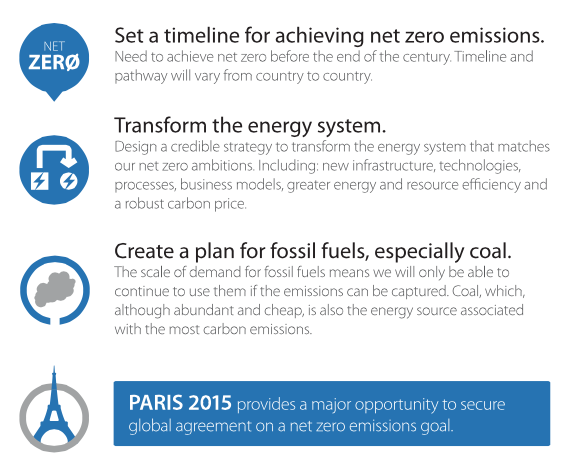 The good news is that several countries do have targets translating to near-zero CO2 emissions by mid-century. The UK, for example, has a legislated goal to cut their total emissions by at least 80% by 2050. The USA has the same target.

Everyone knows that the current Australian Government sucks pretty badly at all things climate change, but it’s interesting to see the recommendations made by the Australian Academy of Science on what their targets should be:

“Australia as a wealthy nation could be expected to have a higher commitment than poorer nations to mitigate its greenhouse gas emissions and to approach zero emissions by 2050. This is consistent with developed countries taking the lead in combating climate change, as required by the UNFCCC Article 3.1, ratified by Australia.”

And the Australian Climate Change Authority recommends even faster cuts: 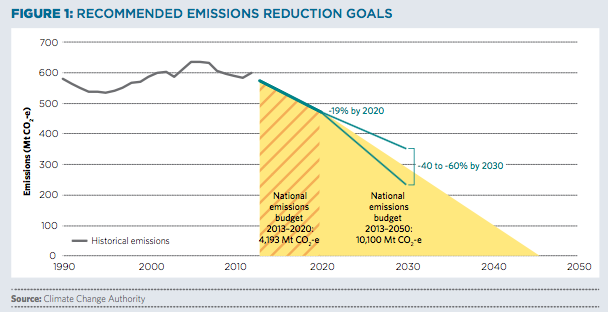 In short, other countries are talking about aiming for zero carbon by around 2050, and some already have targets to essentially achieve it.

A zero carbon target for NZ


So with all this in mind, what should a small, independent, relatively wealthy country, without major interests in fossil fuel industries, that prides and markets itself on being clean and green, with possibly the best renewable energy resources of any country, and huge land-mass for planting trees, do?

We think the answer is pretty clear: a target of zero CO2 emissions by 2050 or earlier is both very doable and a reasonable contribution to global efforts at this stage.

This should mean striving - like Denmark already is - to be fossil fuel independent for all energy and transport by 2050. It could allow for some offsetting of very-hard-to reduce emissions with permanent forests, while focusing on reducing emissions at the source.

Committing to this ahead of the climate talks in Paris this November would show the rest of the world we are taking this problem seriously, and allow New Zealand to hold its head high in the negotiations. Furthermore, we could use this to bolster calls for a global zero carbon target to be included in the agreement, putting pressure on other countries to develop their own plans.

Finally, as we pointed out in Challenge to Our Leaders, it just so happens that reducing our (gross) CO2 emissions in a straight line to zero by 2050 comes out bang on as our per capita share of the trillion tonne global carbon budget: 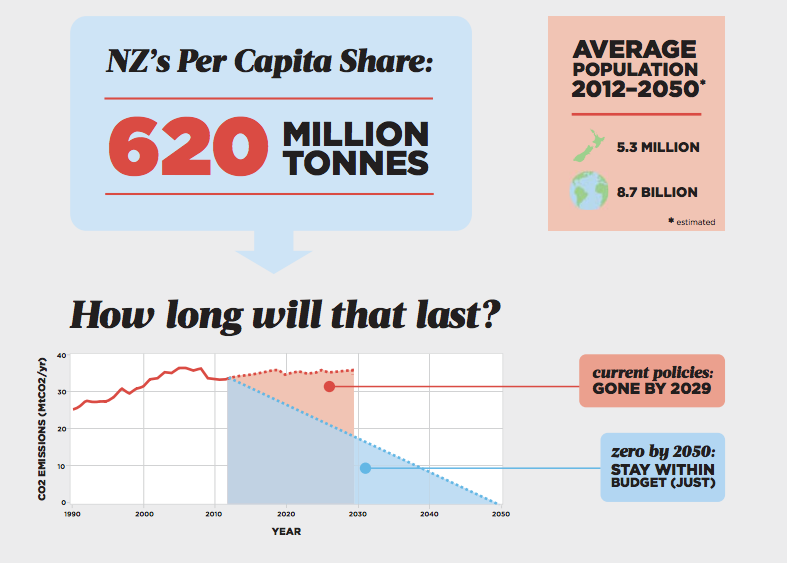 If the maths works out that nicely, it must be right.

Use our quick submission tool to call on the Government to commit to a pathway towards zero CO2 emissions by 2050 or earlier, and call for a global zero carbon target in the Paris deal.