New Zealand is under scrutiny at the UN climate negotiations in Lima right now.  While the rest of the world is getting serious about climate change, we're failing to pull our weight.

There is a growing gap: 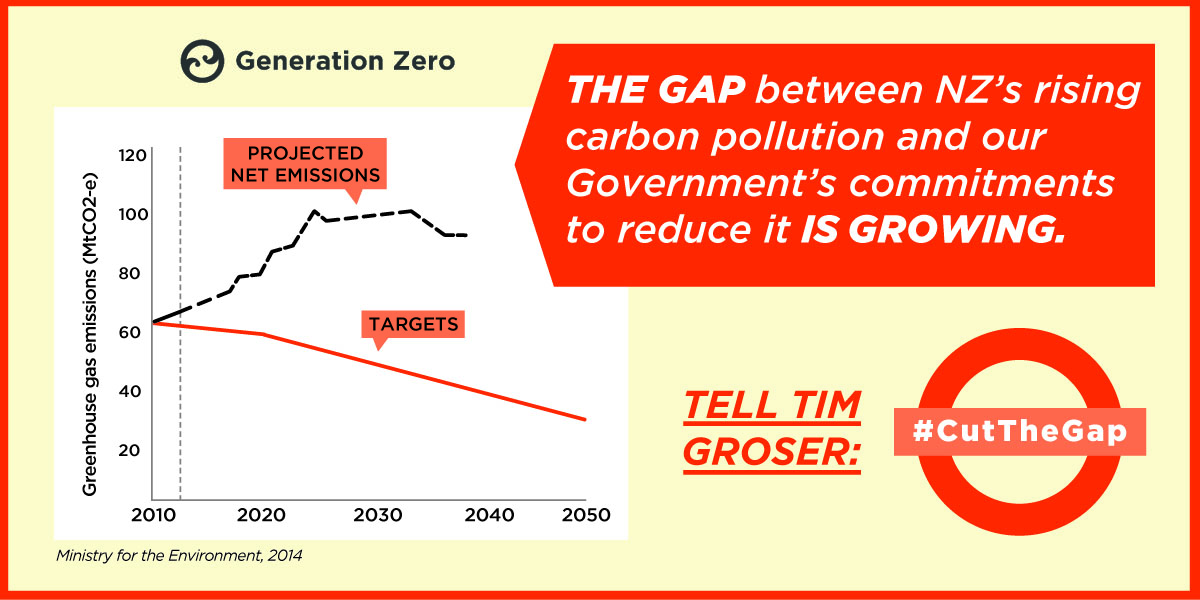 Climate Change Minister Tim Groser thinks he can get away with this because nobody's watching.
You can show him otherwise!

Join us by committing to pay a group visit to the office of you local National MP next Monday 15 December, and show them that Kiwis want action now to achieve real cuts in our carbon pollution. We’ll either be congratulating them for pledging new action in Lima, or showing our disapproval if they don’t act.

RSVP below and help us tell Climate Change Minister Tim Groser he must act now to #CutTheGap.

Not free next Monday? RSVP anyway if you want us to update you with other ways you can call on Tim to #CutTheGap

WHEN
December 15, 2014 at 8am - 9am
WHERE
Group visit to your local National MP's office - we'll provide location details

John Key's Government has always promised New Zealand will be a "fast follower" on climate change. With the US, China and many more countries having committed to stronger action to cut their carbon pollution, there are no more excuses for inaction.

This year's UN Climate Conference taking place in Lima right now offers a perfect platform for New Zealand to announce stronger action and help build the positive momentum towards a strong global climate deal in Paris next year. We're calling on Tim Groser to commit to implement new policies to cut our carbon emissions and announce this before the end of the Lima conference.

This isn’t hard - there are heaps of practical things we can do to Cut the Gap and invest in a better future. New Zealand is rich in potential for clean energy and smarter transport.

But it won’t happen unless we show Tim Groser that Kiwis are watching, that there are consequences for doing nothing, and that we demand he take action to #CutTheGap.