How Can Your Vote Shape a Low Carbon Future? It Starts with Carbon Pricing

This is the first of Generation Zero’s election policy blogs. For each one, we’ll be posting a general explainer on why one element of policy is important for climate change action in this country, along with a more detailed explanation of each of the different party’s policies and how effective we think they will be. Today’s focus is a price on carbon. The blog on party policies for carbon pricing is here.

The premise of placing a price on carbon is relatively simple: carbon dioxide (and other greenhouse gases) are the drivers of climate change, so if we charge a sum of money for each tonne emitted we will (a) force the polluter to pay for their damage and (b) incentivise shifts to low-carbon alternatives, which will help green tech industries and initiate a transition to a low-carbon society.

It’s similar to a tax on tobacco - there are impacts from smoking on the health system so we charge people for it. Unlike policies to fund particular green technologies (such as solar energy) they force a change throughout all of society, and are relatively efficient in that businesses and people are free to search for the cheapest ways to reduce their carbon footprint.

It does impose a cost on businesses and people: a key part of a good carbon pricing policy is that the price starts at a level which doesn’t harm people too much but instead starts a transition to low-carbon alternatives. Governments can also use the price on carbon to raise revenue which can be used to cut taxes on other things such as income, potentially leaving most people better off (this is one feature of the Greens 'climate tax cut' proposal).

Over time, the price can be increased so that the change occurs smoothly rather than with the shock of a new large cost being introduced.

The World Bank, IMF and OECD are all advocating for governments to put a strong price on carbon dioxide emissions.

Currently, New Zealand has a policy designed to put a price on carbon in the Emissions Trading Scheme (ETS), but it is not working.

The premise of an emissions trading scheme is that you place a cap on the amount of carbon that is acceptable to emit, and then give out or sell permits to emit carbon up to that amount.

From that point, companies that have carbon permits (also referred to as ‘carbon credits’ or more commonly in New Zealand, ‘units’) can sell or buy them based on the amount of carbon they need to emit, and the cost of reducing their carbon footprint.

Several policy problems (many of them introduced by the current Government) have prevented the ETS from placing a price on carbon that will actually work to change business incentives.

The first is that there is no cap on the amount of permitted carbon emissions, which means there is no scarcity of carbon credits to create a decent price. There is currently an abundance of available overseas units which are flooding the New Zealand market at very cheap prices (every other ETS in operation restricts or bans use of these units).

Secondly, some high-emitting industries such as agriculture are either excluded from the scheme entirely, or given large amounts of free credits so that they aren’t forced to pay the full cost of their emissions. Some amount of transitional support to give time for businesses to adapt is justified, but as the Parliamentary Commissioner for the Environment has said, the current settings are far too weak and would see taxpayers continuing to subsidise polluting industries until 2090.

Finally, the Government has persisted with a ‘two-for-one’ deal on credits it sells, meaning paying for one tonne covers two tonnes of actual emissions.

The result is a very low price on carbon of less than $3 per tonne emitted (although overseas units are available for as low as 20c) when other countries have prices going over $20 per tonne. 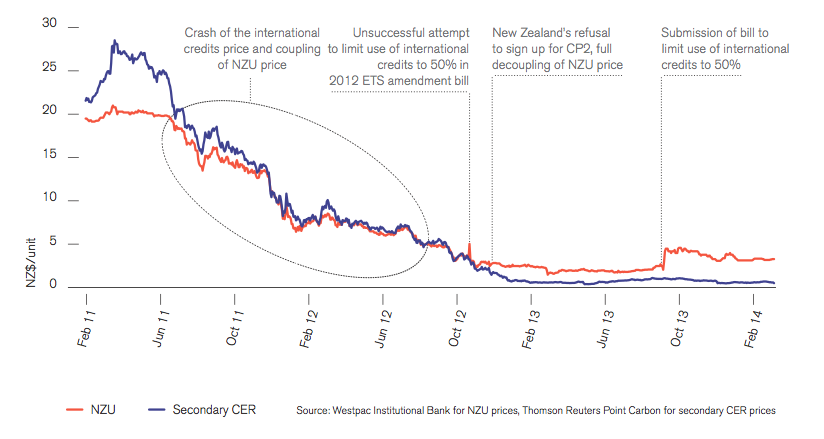 The collapse in New Zealand's carbon price as a result of having no restrictions on the use of international carbon credits in the ETS. Source: World Bank, State and Trends of Carbon Pricing 2014.

The World Bank has conducted research showing that New Zealand now has the lowest carbon price of any operation. This is not trivial: 12% of the global population is now covered by a carbon price, the latest being 7 provinces in China which have introduced a price on carbon of $5-11 USD.

New Zealand's low price means there is no motivation for businesses to reduce carbon emissions, or for land-owners to plant trees to absorb carbon. 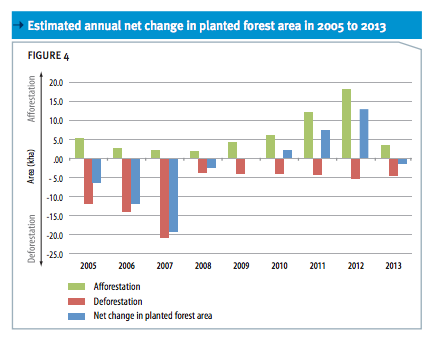 This graph shows the major deforestation that occurred before the ETS was introduced, followed by steady growth to about 180,000 hectares of new forest plantings in 2012, followed by a crash to just 30,000 hectares in 2013 as a result of the collapse in NZ's carbon price. Source: New Zealand Government, ETS 2012 Facts & Figures.

To put a proper price on carbon significant changes have to be made to the current scheme.

Some parties advocate scrapping the ETS altogether and replacing it with a carbon tax, while others prefer to try to fix the current scheme. There’s not clear-cut answer as to whether a carbon tax is preferable over an ETS.

An ETS is complex, which means that the average person may not understand how the system is working to reduce carbon emissions and that society may become disconnected from the ways the Government is trying to reduce emissions. This, in turn, leaves the system mostly understood by businesses who may try to use it to their advantage, either by lobbying for free credits or claiming that the carbon price is increasing costs by more than it really is.

By contrast, a carbon tax is simple and clear in its price message: the price of the tax on carbon is the price being paid to pollute, and everyone can understand that.

On the other hand, an ETS in theory allows us to place a clear cap on the amount of carbon emissions we allow: a carbon tax is more tricky as if you get the price wrong, people may choose to accept the cost and keep emitting.

The devil of both is really in the detail, although the simplicity of a carbon tax does mean some groups see it as a better option. However, unwinding the ETS and starting over would mean another political battle to get a carbon tax across the line and build bipartisan support for it, and some question whether that's a wise move.

The bottom line is that to help steer New Zealand towards a low carbon future we need an effective carbon price, and to achieve that the ETS either needs to be fixed or replaced by something better.

So what are political parties going to do about it? Find out in our second blog on parties' carbon pricing policies.