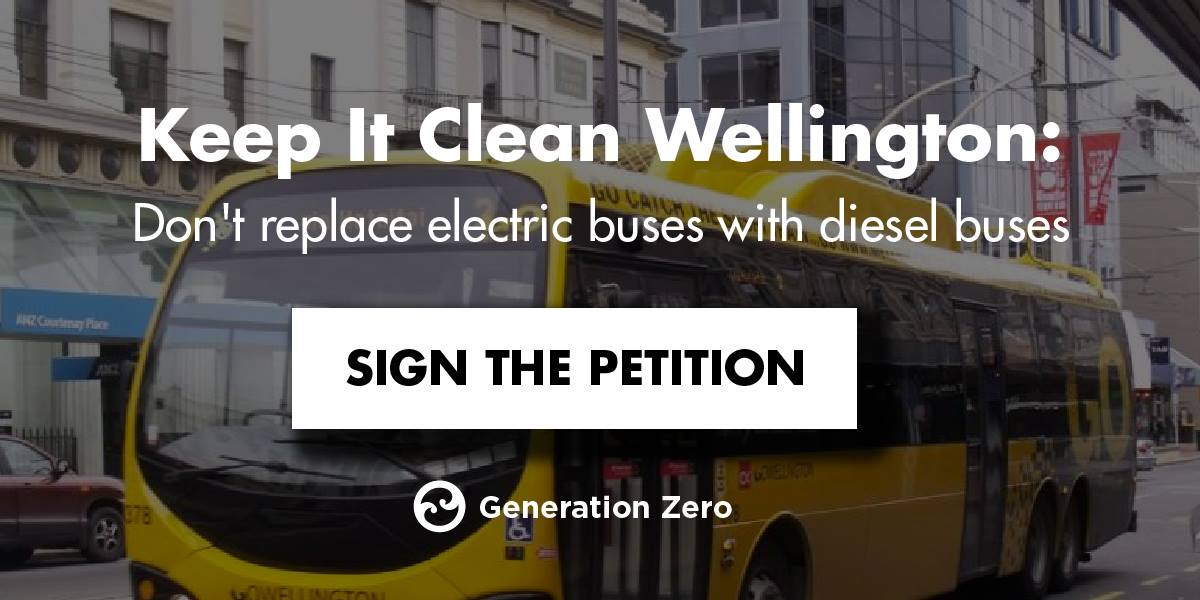 Last year in a controversial decision, Greater Wellington Regional Council announced plans to scrap Wellington’s popular and iconic trolley buses by 2017. At the time, they promised to replace the trolleys with modern hybrid buses. [1]

But now the council is considering reneging on this commitment, and stepping back to the past by replacing many of the trolleys with standard diesel buses.

Wellington is New Zealand’s most densely populated city centre, filled with people who live, work, walk, cycle, shop, and socialise all along the Golden Mile (Courtenay Place, Manners Street, Willis Street, and Lambton Quay). Introducing more noisy and polluting diesel buses to the city centre is completely at odds with Wellington’s aim to become a healthy, vibrant, and livable city.

The Council’s desire for a cheap and easy solution has the potential to lock us into two decades of greater noise and pollution in the city centre and increased carbon emissions. While the council has a goal of introducing a fully electric bus fleet to Wellington, this transition could be delayed for the life-time of the new diesel buses – up to 20 years.

We’re asking that the Council keep our buses clean and find a better solution than diesel.

There are cost-effective low emission alternatives we think the Council should explore:

1. The Council could keep some or all of the current trolleybuses running until fully electric buses become cost-effective. The Council says that the trolleybus system needs to be scrapped in 2017 as the power supply infrastructure requires expensive upgrades. However, Wellington Electricity (the company that runs the trolley power supply) told the Council that it hasn't considered potentially lower cost options like maintaining core parts of the network, while retiring infrastructure in the outer suburbs, and recommended these be looked at. [2]

2. The Council could modernise and upgrade the trolleybuses. The trolleys could be fitted with modern lithium-ion batteries, and the power supply upgraded. [3] This would require significant investment, but it would enable the trolleys to operate off the overhead wires for part of their route. This could allow more expensive infrastructure in outlying residential routes to be retired, while significantly extending the life of the trolley network and providing a direct transition to full battery-electric buses.

3. The Council could replace all ageing diesel and trolleybuses with modern hybrid buses. A PricewaterhouseCoopers report, commissioned by the council, identified this option as having significant net economic benefits for Wellington. Hybrid vehicles would be quieter and release fewer harmful emissions than diesel buses. Hybrid vehicles can also be switched to run purely off battery power along densely populated segments of the route such as the Golden Mile.

Diesel buses should be the last choice.

In a recent report commissioned by the Regional Council, diesel buses were the worst option against a number of criteria: [4]

Electrified public transport offers a great opportunity for Wellington to build an attractive public transport system. This is the way of the future, and as a progressive, forward-thinking city Wellington should help lead the way. Bringing back the diesel buses is short term thinking.

Let’s demand better and call on the Council to keep the trolleys until we can replace them with something equally clean, quirky and quiet.

The Regional Council has, as part of its Climate Change Strategy, the following objective: “Greater Wellington will act to reduce GHG emissions across all its areas of influence, including its own operations, helping to create the conditions for a smart, innovative, low-carbon regional economy.” [5]

We totally support this ambition - but we want action as well as words. If we want to fulfill this goal as a city, we need to keep our buses clean.

Keep Our Buses Clean: We don’t want to see Wellington’s trolley buses ditched for outdated diesel buses. We call on you to start Wellington’s transition to cleaner, more attractive public transport, and find a better solution for our buses than diesel. We support keeping the trolley buses in action until we can shift directly to other clean transport options such as electric buses or modern trams.