So What Are Parties Promising on Transport?

The last post was an explainer on how we can make changes to our transport system to make it better for the climate. Now we’re taking a look at party's policies.

National have gone full steam ahead with the Roads of National Significance and have been heavily resistant to the idea of a transition to different options. Their plans for our transport system are at their core business as usual, involving huge expenditure on new roads.

With that in mind, they have made some commitments to different transport options. They have recently announced they will provide $100 million for urban cycleways across the country over four years, roughly doubling the current cycleway budget. After prolonged pressure they eventually announced they would help fund the City Rail Link in Auckland, however they want to delay the start of the project until 2020 despite Auckland Council planning to begin next year. Their overall attitude is that they don’t want to lead or promote a transport transition, but will respond to a case for new infrastructure based on existing demand. With roading projects however, they are happy to invest on the assumption of future travel growth.

National is giving some support to electric vehicles by exempting them from road user charges, and has given $6.75 million to support the ‘Stump to Pump’ programme to investigate biofuels from wood waste.

Labour has made a commitment to rebalance the transport budget to support the full range of transport options and develop a “21st century transport system”.In urban areas they want to invest “significantly more” in walking, cycling and public transport. Regionally, they want to invest in roads, rail, and coastal shipping.

Their most specific policy is for Auckland: they want to provide 50% funding for the City Rail Link to begin immediately and double the number of trains in the Auckland system. They have made a commitment to fund our Congestion Free Network plan, showing they are serious about encouraging Aucklanders to shift away from cars. They have also committed to fund commuter rail in Christchurch starting with a $100 million commitment.

They also promise to support locally-produced biofuels and work with the electric vehicle industry to encourage the uptake of electric vehicles and the provision of recharging infrastructure, with no further detail.

The Greens have a number of policies directed at transitioning the transport system off fossil fuels. They want a dramatic change in transport funding priorities without increasing the overall spend and have released detailed, costed plans. 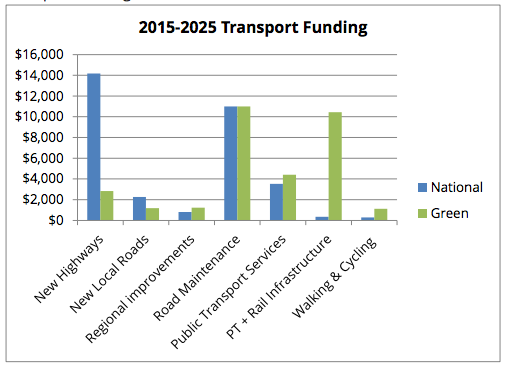 They want to introduce the Student Green Card to provide free public transport for students, invest at least $100 million per year in urban cycleways and develop regional rail transport. In addition they have specific plans for Auckland, Wellington and Christchurch. In Auckland they too have committed to the Congestion Free Network, setting a deadline of 2020 for a number of initiatives including the City Rail Link. They are committed to Fast Tracking Wellington, a plan to invest in light rail, electric buses and protected cycleways around the city. And in Christchurch they want to improve public transport services by establishing a single body to manage them across greater Christchurch.

New Zealand First are committed to maintaining the current roading network while also stating that they want to reduce “ever-increasing dependence on the motor car”. They describe providing high quality public transport as “a major priority” and wish to require every major roading project to be subject to a test of whether its objectives can be met by cost-effective public transport alternatives. They are light on specifics, not making a commitment to particular transport plans like Labour and the Greens, however they have announced that they would like to develop the “Railways of National Importance,” with the goal of having passenger train services between all major centres and shifting freight away from the road network. They have promised an initial funding injection of $300 million diverted from the Roads of National Significance programme.

The Maori Party are light on specifics, but state that they wish to reduce transport inequalities by decreasing the need for private cars and making public transport, walking and cycling more common. They also state that they want to improve urban design and broadband to make travel less necessary.

United Future appear to be largely committed to the status quo on public transport. They want to complete the Roads of National Significance and would like to introduce Public-Private Partnerships for urgently required highways. They are positive about alternative transport options but most of their policy includes ‘encouraging’ or ‘promoting’ them rather than a specific desire to change how transport funding is prioritised. They would like to improve cycleways in all areas and improve the school bus system to remove road congestion.

The Internet Party want to review New Zealand’s transport strategy so that public transport, cycling and walking are prioritised, and mention that with better information technology people will be able to work from home more. Their only specific transport plan is to construct light rail from the Auckland city centre to the airport.

The most the Conservatives have offered is a statement from Colin Craig stating that light rail is viable in Auckland and not in other centres, that rail is viable in some parts of the country and not others, and that the roading network is behind population growth, suggesting he is not interested in changing current transport priorities.

Tellingly, ACT only has a “Roads” policy document, not a “Transport” one. Their policy indicates they want more road building and more cars on them as they state “Increasing traffic flows should not be seen as a negative factor because the more road users there are, the more funding there is to build and maintain roads”. Consistent with their general climate change policies they are not at all concerned about carbon emissions. However a couple of their policies in isolation could be beneficial for reducing car dependence: introducing road pricing such as congestion charges, and removing the compulsory bike helmet law (which is believed to deter some people from riding).